Trader isn’t buying Bed, Bath & Beyond bounce quite yet

Posted On October 13, 2019 By admin Posted in World Retail news

Bed, Bath & Beyond is bouncing hard.

The stock soared more than 20% on Thursday, its second-best day on record, after the company named former Target executive Mark Tritton as president and CEO come early November.

The stock was up more than 3% in Friday’s premarket above Thursday’s closing price of $12.09.

It’s been a rough stretch for the stock, though. The homewares retailer has declined nearly 40% in the past six months and is down 85% from its 2014 record.

“The orderliness of this decline has been amazing,” Todd Gordon, founder of TradingAnalysis.com, said Thursday on CNBC’s “Trading Nation.” 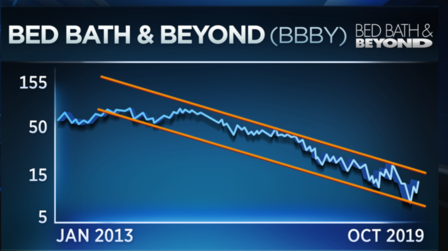 Gordon now needs to see the stock break through two critical levels before he’s ready to call this a comeback.

“We need to break through this downtrend or bloodbath, which is right around the $18 region, in order to get those buy stops and more buyers starting to come into the market,” he said. “There’s one more sort of intermediate target that we should overcome if you’re looking to add this to your portfolio, [and] that is the 200-day moving average right there, that’s at about $13.” 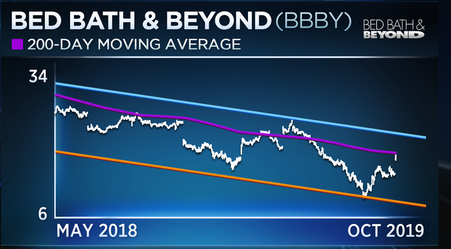 Bed, Bath & Beyond last traded above $13 in June. It briefly traded above $18 earlier this year but hasn’t held firmly above that level since mid-2018.

“This is kind of a trade that’s like Missouri — it’s the ‘show-me’ trade. [It needs to] break through before we start to give it some attention,” said Gordon.

Gina Sanchez, CEO of Chantico Global, sees the leadership change as a positive for the company as it revamps its strategy.

“I think this has been a bloodbath and beyond for a while now and so this turnaround definitely needed something,” Sanchez said during the same segment. “I think this new CEO could be interesting in addition to all of the changes they’ve made, including investing in the in-store experience, pumping up their e-tailing game and investing in higher margin products.”

However, Sanchez does see one concern that could put a dampener on its operations and the stock’s performance.

“The big cloud hanging over their head is 65% of their imports come from China. UBS put that out in a recent report that showed that 13% of their earnings could potentially be impacted based on their China exposure. That’s kind of a big black cloud,” said Sanchez.