Starbucks on Wednesday reported quarterly revenue that topped analysts’ expectations as cafes in the U.S. and China attracted more customers.

Shares of the company jumped more than 2% in extended trading.

Here’s what the company reported compared with what Wall Street was expecting, based on a survey of analysts by Refinitiv:

Excluding the sale of the Tazo brand, Nestle-related transaction costs and other items, Starbucks earned 70 cents per share, in line with estimates from analysts surveyed by Refinitiv. 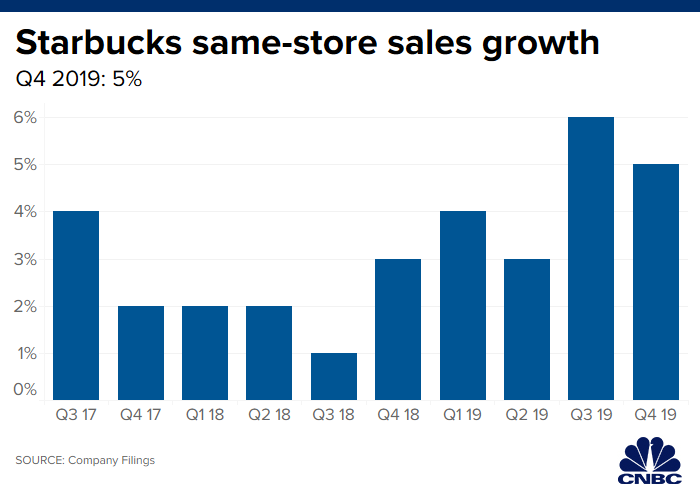 In the U.S., sales at stores open at least a year increased by 6%, driven by its cold drinks. During the quarter, Starbucks introduced its first new pumpkin coffee drink since the pumpkin spice latte: the pumpkin cream cold brew. This summer, the coffee chain also expanded distribution of its Nitro cold brew in all company-operated U.S. stores, Johnson said. U.S. cafes also grew traffic during all times of the day, for the second consecutive quarter.

Executives attributed U.S. sales growth to investments in its employees, like better benefits and more hours, which in turn leads to higher customer satisfaction scores.

In China, despite growing competition from Luckin Coffee and concern about an economic slowdown, Starbucks saw same-store sales growth of 5%, as more customers bought its products and spent more. Delivery through its partnership with Alibaba accounted for 7% of sales during the quarter.

The coffee chain opened more than 600 net new cafes in China during fiscal 2019 and now has more than 4,000 locations across the country. Those new locations include a smaller format cafe with limited seating in Beijing, similar to those developed by Luckin. Starbucks plans to construct even more of those smaller locations in fiscal 2020.

“Our strong performance throughout fiscal 2019 gives us confidence in a robust operating outlook for fiscal 2020,” Johnson said in a statement.

Starbucks is also expecting to spend about $1.8 billion on capital expenditures.

The company expects fiscal 2020 adjusted, or non-GAAP, earnings per share in a range of $3 to $3.05. Analysts were expecting the coffee chain to report fiscal 2020 earnings of $3.08 per share.

In September, Starbucks said that it expects fiscal 2020 earnings to be below its “ongoing growth model of 10%.” The range provided Wednesday estimates adjusted earnings per share will grow by 6% to 7.8%.

CFO Pat Grismer said in September that one-time tax benefits realized in fiscal 2019 would be a headwind and that Starbucks bought back $2 billion worth of shares earlier than originally planned.