Halloween shoppers are ghosting traditional brick-and-mortar stores in favor of shopping online for their costumes, according to 1010data’s eCom Market Benchmark report.

It’s a big and growing business. The National Retail Federation estimates that the average shopper spends $86.27 on a Halloween costume and decorations. Consumers bought $408 million in Halloween costumes online from big retailers, including Amazon, Target and Walmart, over the 12 months through September, according to the data. 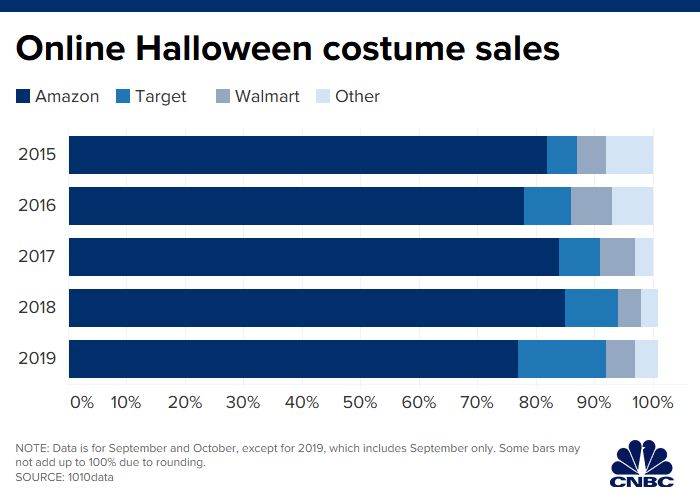 In 2018, Amazon dominated the online costume market with about 85% of all sales. Target’s online costume sales rose by 2% from 2017 to 2018, and in September 2019, Target accounted for 15% of all costumes bought online, according to 1010data. Costume sales at Walmart, the world’s largest retailer, are also on the rise.

From 2017 to 2018, online Halloween costume sales during September and October rose 8%.

The data does not include specialty stores such as Party City, or Spirit Halloween’s seasonal stores, which pop up on the graves of vacant storefronts left by retailers such as Toys R Us.