Gap, one of the worst-performing retailer stocks, could go lower


One of the worst-performing retail stocks this year just broke down even more.

Gap shares tumbled more than 7% on Friday after CEO Art Peck stepped down and the company cut full-year earnings guidance below consensus. The stock is down more than 35% for the year, while the XRT retail ETF has climbed 8% over the same stretch.

It could get worse for Gap, according to Craig Johnson, chief market technician at Piper Jaffray.

“Gap shares are just purely out of fashion at this point in time,” Johnson said on CNBC’s “Trading Nation” on Friday. “You’re back to levels you were at in 2016 and 2011, and it doesn’t look like there’s any indication that a bottom has been made.” 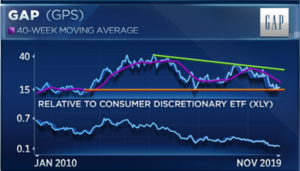 The retailer is also firmly in bear market territory, having fallen nearly 50% from a March high. Shares are considered in a bear market when off more than 20% from 52-week highs.

“On a relative basis, this stock has seriously lagged the overall market. If you go back to 2012, the S&P is up 143% and this stock is still at the same level it was in 2012. I’m not willing to go bottom-fishing here on this stock until there’s clear evidence of some sort of trend change starting to unfold with the shares and at this point in time, you don’t have that. I’m avoiding the shares altogether,” said Johnson.

“When you really look at the fundamentals, even though the valuations are dropping, we’re looking at a 22% decline in earnings over the next 12 months. And even as far out as 2022, you’re still seeing an earnings contraction expected. So their valuation should be going down if you’re actually expecting them to make less money,” Gibbs said during the same segment.

Gap posted a 15% decline in earnings in its recent quarter. For the full year, analysts surveyed by FactSet anticipate a 26% contraction in profit.

Gibbs also doesn’t see the departure of Peck as a point against the company. Board Chairman Robert Fisher, son of Gap’s founders, has been named interim CEO.

“I actually don’t see the CEO leaving as a negative thing. I think that was the one hope that they might build a turn-it- around, but now that puts the Old Navy spinoff in question, the one bright spot. You really don’t want to get into the stock right now,” said Gibbs.