‘We need even more progress on Walmart.com’

Walmart is admitting it still has work to do online.

The big-box retailer said Thursday its e-commerce sales were up 41% during the latest quarter, thanks to a strong grocery business.

“We’re making progress on many fronts, but we need to do more and move faster, especially with our assortment including marketplace,” CEO Doug McMillon said in a statement. “Our strength is being driven by food, which is good, but we need even more progress on Walmart.com with general merchandise. We’re mixing the business out better to achieve better margin rates, but there is more work to do. We’re committed to progress and building a larger, healthier eCommerce business. Our customers want that, our marketplace sellers want that, and so do we.”

Walmart’s online business has especially come under fire this year, as competition with Amazon only intensifies.

Vox reported in July that Walmart’s e-commerce division was on track to lose more than $1 billion this year, which had caused some strife internally.

Some of those tensions reportedly were between Walmart’s CEO in the U.S., Greg Foran, and e-commerce chief Marc Lore. Foran has stepped down from his role, replaced by former Sam’s Club CEO John Furner. 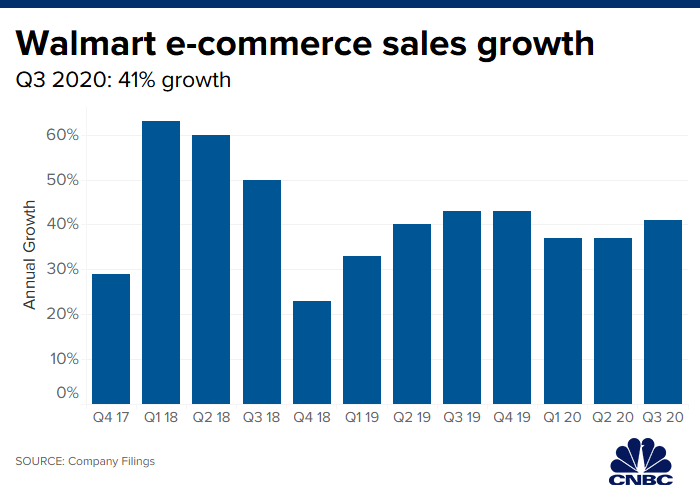 Walmart has been investing in faster delivery options, including a next-day option, and it has acquired a slew of online brands, some of which remain unprofitable, according to Vox. Walmart said in October it will be selling one of the clothing brands it had bought, ModCloth.

Grocery, however, has been a strength, thanks to new services being rolled out like in-home grocery delivery and an unlimited grocery delivery membership that Walmart now offers from 1,400 U.S. stores.

“Grocery pickup and delivery, along with new offerings like Unlimited Delivery and InHome Delivery, will help us unlock advantages we have to serve customers in a way that reduces friction and enhances convenience,” McMillon said. “We need to translate this repetitive food and consumable volume into a stronger Walmart.com business that’s profitable over time, so that’s what we’re working on.”

Some analysts argue this is where a rival like Target, for example, has a leg up.

Target might have a weaker grocery business, but it has invested heavily in expanding its assortment of home goods, apparel and beauty, and launching more in-house brands.

Target is “better with athleisure, they’re better with toys,” Jharonne Martis, director of consumer research at Refinitiv, said on CNBC’s “Squawk Box.” “Walmart wins when it comes to groceries. But in general, when you think about the entire merchandise assortment for the holiday season,” Target wins, she said.

Walmart shares were recently up about 1%, having climbed more than 30% this year. During trading Thursday morning, the stock hit a 52-week high of $125.38.﻿