Target’s earnings on Wednesday crushed estimates, and the stock market rewarded the retailer. But things have not been great for many other retail store brands that recently reported quarterly earnings. Still, a relief rally could be looming for some of the hard-hit retailers like Home Depot, based on a CNBC analysis of recent Black Friday period trading history, conducted using the Kensho hedge fund analytics tool.

The SPDR S&P Retail ETF, the XRT, fell by nearly 2% on Tuesday, with disappointing results from Home Depot and Kohl’s pressuring the sector. Home Depot and Kohl’s both reported a miss on revenue, while lowering their full-year forecasts. In response, Kohl’s saw its worst day ever, plummeting nearly 20%. Home Depot suffered its worst day since February 2018, shedding more than 5%. Adding to the retail pain, Urban Outfitters fell double digits after it missed third-quarter profit and sales expectations.

But over the past 5 years, the S&P 500 Retailing Index, as tracked by the SPDR S&P Retail ETF, tends to perform well in the week leading up to Black Friday. It trades positively 60% of the time, with an average gain of 1.25%. Among the retail stocks that perform best in that period: Home Depot, as well as Wayfair and Costco. These companies all trade higher at least 80% of the time. 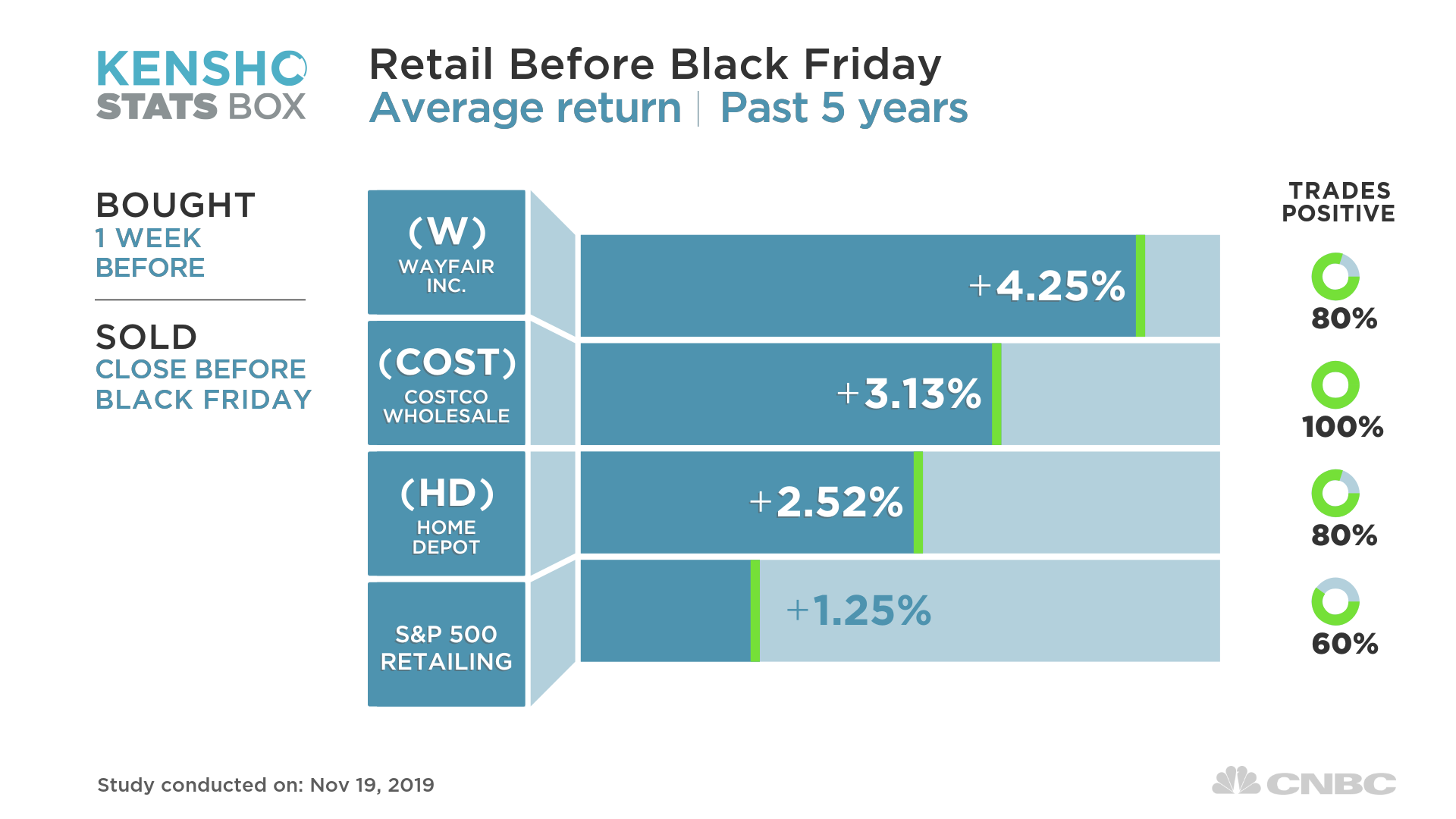 Retail and consumer analysts say that even though consumer spending is strong, and the biggest names in the group — Walmart and Target — look healthy, the sector will always feature winners and losers.

Walmart CEO Doug McMillon said at the CNBC’s Evolve Summit in Los Angeles on Tuesday, “We’re excited about the holidays. We think it will be a good one.” He added, “The customer overall is in pretty good shape.”

Oppenheimer analyst Brian Nagel said on CNBC’s “Squawk Box” that the Home Depot sales miss was due to an internal company issue, which he said is rare for Home Depot, rather than a miss due to economic headwinds, tariffs or lumber price deflation.

Earnings beat the Wall Street estimate by 1 cent, but revenue missed analysts’ targets as spending on improvements to its IT systems, stores and supply chain weighed on overall sales.

“The backdrop of home improvement was quite good,” Nagel told CNBC on Tuesday. “The lumber price issue is not as big a deal anymore, weather has been favorable, and then we have this, what I have been really been excited about, is this improving overall housing environment.”

“You really need to avoid the potholes from a structural perspective,” said Matt Boss, equity research analyst at J.P. Morgan in an interview with CNBC’s Trading Nation. He says to avoid department stores and mall-based retailers but sees opportunity in athleisure and discount companies.

Liz Dunn, founder and CEO of retail industry consultant Pro4ma, told Trading Nation that department stores are in need of rescue and Macy’s will likely be the first to feel the pressure, but she is more positive on Kohl’s, though says it is in the toughest part of the sector.

“I think we have seen some instances of department stores that are making some positive changes. Nordstrom [and] Kohl’s [are] doing a lot of innovative things to transform their fleet, but it’s the worst neighborhood to be in. And I would say, second to a J.C. Penney– or Sears-type situation, Macy’s has become one of the worst houses in a bad neighborhood.”