DoorDash continues to lead in the food delivery wars 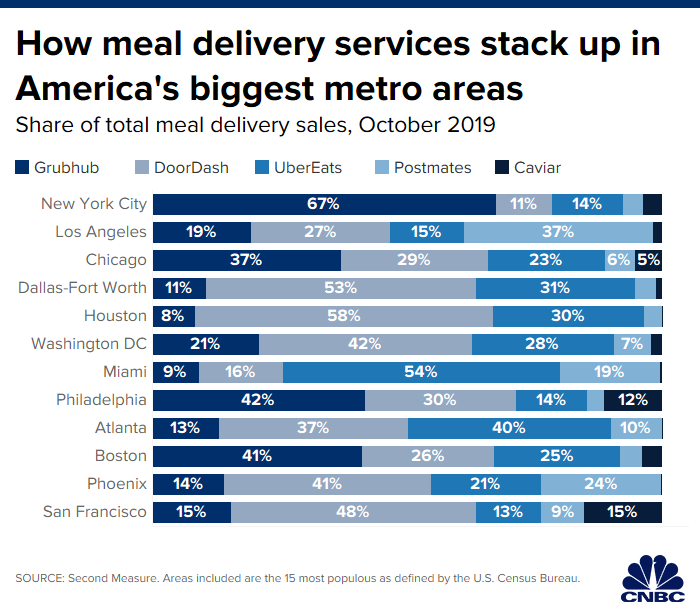 An exclusive partnership with Cheesecake Factory and deals to deliver for Chipotle Mexican Grill, Five Guys and other local restaurants made DoorDash the leader in U.S. meal delivery last month.

According to data from consumer analytics firm Second Measure, DoorDash has 35% of the meal delivery market. Publicly traded rivals Grubhub and Uber Eats captured 30% and 20% of the market, respectively.

DoorDash is also the fastest growing, with sales increasing 114% since October 2018, while the overall market grew by 40%.

“Restaurantdelivery will survive, if not thrive, given the healthy consumer demand for the service across quick service, fast casual and casual dining….”

DoorDash is reportedly planning to enter the public markets through a direct listing, according to a Bloomberg report. Based on recent investments, the company’s valuation is approaching $13 billion, the report said.

The meal delivery leader may now have the biggest share of customers nationally, but the landscape remains fragmented in major cities.

According to Second Measure data, DoorDash has the most customers in Washington D.C., Houston and San Francisco.Grubhub is the dominate player in New York City while Uber Eats grabs the top spot in Los Angeles.

The Washington, D.C. attorney general is accusing the company of “deceptive” business practices, alleging DoorDash kept tips meant for workers and mislead customers in general about where their tips were going. D.C. Attorney General Karl Racine is seeking to recover millions of dollar in tip money paid through DoorDash over the previous two years. In July, DoorDash changed a policy allowing it keep a portion of driver tips.

The overall meal delivery business is also facing increasing pressure on margins with the rise of price comparison tools available on Google and through the site FoodBoss.