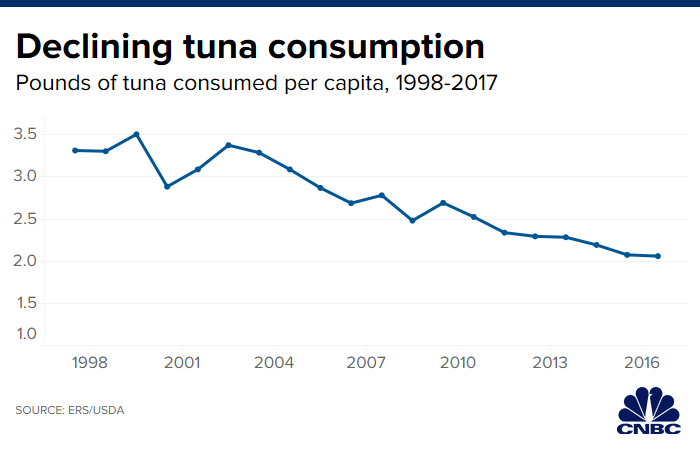 For decades, the can opener and a tin of canned tuna were considered “pretty darn convenient,” according to Ken Harris, managing partner at Cadent Consulting Group, who has worked with the canned tuna business.

But now, they’re considered a hassle.

That’s one reason why Bumble Bee Foods filed filed for Chapter 11 bankruptcy Thursday as it prepares to sell itself. The company, which also sells canned sardines and salmon, holds 22% of the market share in the shelf-stable seafood category, according to Euromonitor.

Another contributing factor to tuna’s decline: the fear of mercury poisoning, sparked by a 2004 joint advisory from the Food and Drug Administration and the Environmental Protection Agency that cautioned against eating too much of the canned fish.

Furthermore, like many other traditional food companies, Bumble Bee has struggled to keep up with changing tastes as consumers turn away from processed foods.

Bumble Bee and its rivals StarKist and Chicken of the Sea, have been trying to appeal to younger consumers by introducing new flavors like sriracha and doubling down on tuna pouches, rather than canned tuna.

“Consumers really want something that is prepared and ready to go,” Harris said. “New packaging hasn’t necessarily been the answer.”

The three largest tuna companies are also facing competition from upstarts like Wild Planet Foods and Safe Catch, which market their tuna as safer and higher quality.

In 2017, the company pleaded guilty for price fixing and was fined $25 million for forming a cartel with Chicken of the Sea and StarKist. The Department of Justice is its second-largest creditor, according to bankruptcy filings. Bumble Bee is also facing lawsuits related to the matte.