Inside Home Depot’s efforts to stop a growing theft problem

Imagine loading up a cart full of merchandise at a store, and just walking out the door in broad daylight as store employees watch you do it.

It’s known as organized retail crime, and it’s a growing trouble for the nation’s retailers. Instead of stealing for personal use, these criminals are part of a larger crime ring. The goods are taken to someone else in exchange for cash, then resold at a pawnshop, online or directly to a buyer.

“I personally believe this is driven by the opioid crisis,” Carol Tome, Home Depot‘s then-chief financial officer, said in a phone interview with CNBC in May.

Many of those who steal are addicted to opioids. They turn the stolen goods quickly, often the same day, into money to buy drugs, according to the Utah Attorney General’s Office. The crime rings vary in size and complexity and can include as many as 100 people across multiple states, according to Home Depot.

“We watch them leave our store with product,” said Tome, who retired in August. “Often, they are armed and we don’t want to put our customers or associates in harm’s way.”

A suspect became aggressive when she was stopped from taking what seemed to be unpaid merchandise.

Home Depot is far from the only retailer seeing the spike in this activity.

Organized retail crime costs retailers nearly $778,000 per $1 billion in sales in 2018, an all-time high, according to a National Retail Federation survey. Nearly 3 in 4 retailers reported an increase over the previous 12 months. The 2018 survey included information from 66 retailers.

Theft contributes to what is known in the industry as “shrinkage.” The category includes inventory loss due to defective or damaged merchandise, vendor fraud, administrative errors, employee theft or shoplifting — and organized retail crime.

A suspect sprayed what appears to be pepper spray in the face of a store employee when he was trying to stop him from leaving with unpaid merchandise.

During the first three quarters of 2019, Home Depot reported that an increase in “shrink” hurt its financial results.

“There’s been pressure to our margin from shrink, which was the highest contributor to the decrease year over year,” Home Depot CFO Richard McPhail said in the third-quarter earnings call Tuesday.

Home Depot began seeing an increase in theft of high-value items in May, Tome said. The company will not comment on how much organized retail crime has cost it.

“In the departments that we are seeing increased pressure, they’re more what we consider kind of malicious,” Ann-Marie Campbell, Home Depot’s executive vice president of U.S. stores, said on the earnings call. “And we’ve had initiatives on the way, and have implemented in our high-risk stores, some of the things we’ve done in the past to make sure that we secure our product.”

Law enforcement served a search warrant on a home near Salt Lake City in which a resident was suspected of selling stolen goods.

While retailers account for a certain level of shrinkage as part of the normal course of business, once it surpasses a threshold, it starts to hurt profits. Not only is that bad for shareholders, but it can be bad for consumers.

“We have been very good about not raising prices as a result of our shrink equation,” said Scott Glenn, Home Depot vice president of asset protection. “But if [shrink] gets to a point where we cannot continue to do business this way, ultimately, we will have to pass it along.”

In other words, higher prices for honest shoppers.

Glenn said he has seen a correlation between higher rates of organized retail crime and areas of the country where the dollar amount for felony thresholds have been raised. The felony threshold is the dollar value of goods stolen that determines if charges are a felony or a misdemeanor. It varies widely by state. 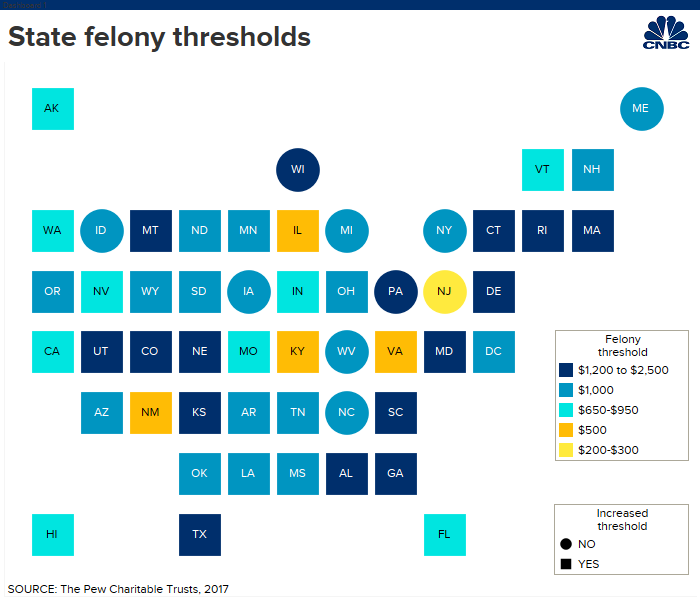 Glenn said the opioid epidemic fuels organized retail crime in many cases, and e-commerce amplifies its reach.
With the rise of e-commerce, it is easier to sell items quickly online than in person at pawnshops or other methods.

Home Depot may not stop the theft as it happens, but it’s not ignoring the problem.

“We know that we’re not going to get everybody. But if we can get those folks that are really hurting us, we can actually drive our shrink numbers down and make the store safer,” Glenn said.

The retailer is building case files that not only help law enforcement go after suspects, but help change laws.

“We have broken up some pretty big rings,” Tome said.

The suspect of the search warrant (center) told law enforcement that some of the goods he had were stolen, but he did not steal them himself.

Utah is one state where Home Depot, eBay and law enforcement have been working together to identify and prosecute organized retail crime rings. In Salt Lake City, the retailer worked with the state’s attorney general’s office over several years to close down a $1.5 million fraud case that involved seven pawnshops and a crime ring that was stealing and reselling the stolen goods.

Chris Walden, a special agent with the Utah Attorney General’s Office, said eBay identified 34 Utah pawnshops where suspected stolen merchandise was being sold, both out of the shop itself and on eBay.

“During the course of a year-long investigation with the [Utah] attorney general’s office and the unified police department, we ended up seizing 53 pallets worth of merchandise in one day from seven [pawnshop] locations,” said Jamie Bourne, who manages four teams strategically located in different parts of the U.S. as an organized retail crime manager for Home Depot.

He said the retail value of product recovered from those seven pawnshops was estimated at more than $1 million, from Home Depot and many other retailers.

EBay declined CNBC’s request for interviews but provided a statement, that said in part, “The recent pawn bust in Utah is an excellent example of eBay working closely with law enforcement and retailers to identify a large organized retail crime ring. We’re pleased to have assisted authorities in their investigation and prosecution of their case and look forward to the suspects being brought to justice.”

Home Depot’s Jamie Bourne and his team, whose faces we cannot show, helped law enforcement during the raid.

While retailers may be competitors when it comes to selling product, when it comes to identifying criminals stealing merchandise, it’s a group effort, Bourne said. Beyond eBay, he said, “We work with Lowe’s, Target, Walmart, CVS.”

Earlier this year, Utah enacted a law that prohibits pawnshops and other secondhand merchants from accepting unopened merchandise in original packaging without a receipt or items where serial or identifying numbers have been removed. It was passed in an effort to curb the selling of stolen merchandise. Pawnshop laws vary by state, but Utah’s laws make it easier for law enforcement to crack down on organized retail crime.

CNBC rode along with undercover law enforcement officers in Utah attempting to sell stolen, unopened merchandise to two separate pawnshops after the law was passed in September. Neither pawnshop accepted the items, though one pawnshop employee coached the undercover officer to open the item, use it once and bring it back the next day. An employee at the other pawnshop said he was better off selling it online, citing the new law.

While the law may be deterring some of the crime, it’s not a panacea.

A search warrant is served

“Since we passed the new law, it seems like it’s getting a little bit better,” Walden said. Unfortunately, he said, law enforcement is now seeing more of the stolen goods being sold on e-commerce sites instead of at pawnshops.

The Utah Attorney General’s Office had been tracking one suspect who appeared to be selling stolen tools out of his home, attracting business by posting photos on Facebook. CNBC was there when a search warrant was served at the residence of the suspect.

Chris Walden is a special agent with the Utah Attorney General’s Office.

Tools were taken out of the home, and Home Depot employees were on site to identify and scan products to determine whether or not they came from the retailer. Each item was then cataloged and taken into evidence. The value totaled around $12,000.

The suspect told the law enforcement officers questioning him that he had never stolen anything himself but acknowledged that he knows that the items others have sold to him are stolen.

Walden said some of the items removed from this suspect’s home may be legitimate purchases as a box of receipts was also recovered. Still, Walden estimated a little more than half of the recovered merchandise is likely stolen.

The suspect was arrested on charges of possession of stolen property. The AG’s office plans to press charges.

This pallet full of goods was taken from the search warrant.

The suspected stolen products were moved to a location where the items will be held as evidence while the case is prosecuted.

CNBC got a look inside an undisclosed location that looks more like the back room of a retailer than a police evidence facility. Most of the items were recovered from the raid on seven pawn shops.

“We believe that we’re around $1.2 million on this case alone,” Walden said, when valuing the merchandise in evidence.

Or at least, that was the value when it was stolen. Law enforcement will return the goods to the retailers after the origins are determined, though it can’t be done until the case is closed. At that point, the products are often unsellable because they become obsolete.

Walden showed CNBC how it’s organized by retailer, and pointed out many items with original price tags or even anti-theft devices still attached. There was an $800 air compressor still screwed to the wooden pallet it was originally on when delivered to the store.

It’s hard for Walden to calculate the investment of time, money and resources on the part of law enforcement and retailers, but he says the payoff is worthwhile.

“We know after visiting with Home Depot and partnering with them that their shrink numbers are already down in Utah,” he said. “[Home Depot has] saved a significant amount of money in the Utah market where they only have 21 stores.”

Scott Glenn is in charge of asset protection for Home Depot.

The retailer has instituted a number of deterrent tactics to make it harder for criminals to steal, including the addition of more visible camera surveillance and alarmed spider wraps on certain high-value products. At the same time, however, it works to ensure the anti-theft strategy doesn’t impede the shopping experience for paying customers.

“This has tentacles,” he said. “Organized retail crime drives other crimes. It drives drugs. It drives guns. It drives human trafficking.”

Further, Glenn said, “it doesn’t just hit Home Depot. It hits every retailer. No matter where you shop, this is impacting you.”