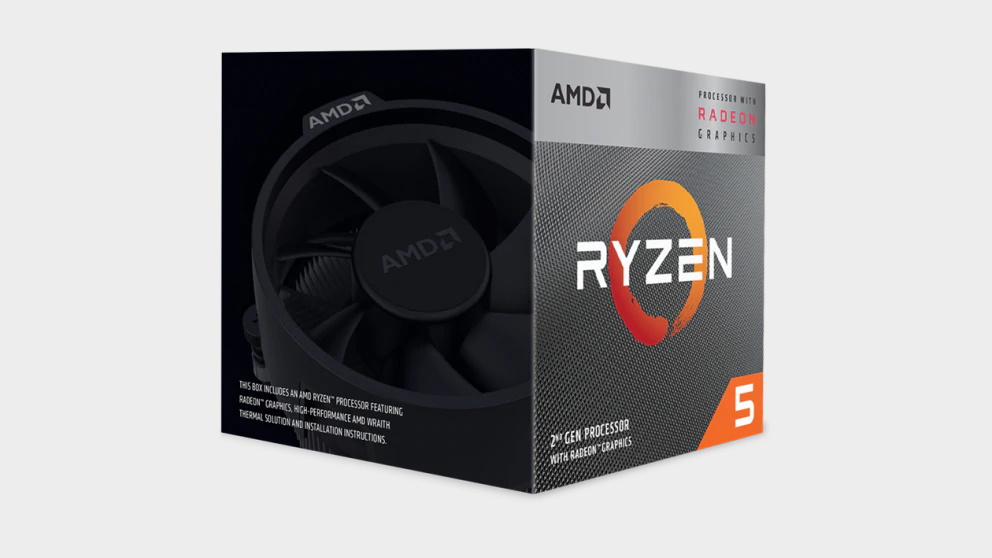 The AMD Ryzen 5 3400G is a quad-core processor, which may seem a little low in an age of 10, 12, and 16-core chips. Even AMD's six-core processors run relatively cheap nowadays. So why settle for less?

The reason why you might want to consider the Ryzen 5 3400G is because it's not merely a CPU, it's an APU. That's what AMD has called its CPUs with integrated graphics built-in for decades.

The Ryzen 5 3400G is a recent addition to a long line of graphics-accelerated chips made for budget-friendly gaming PCs—so, no graphics card required.

That's a great money saver, and even the RX Vega 11 GPU silicon found within the Ryzen 5 3400G is enough for some low- to mid-end gaming at low resolution. Yet it's not your only option for a cheap gaming PC. With Black Friday and Amazon Prime Day coming up, there are sure to be heaps of cheap graphics cards on sale. So let's weigh up the pros and cons of each.

The AMD Ryzen 5 3400G is a quad-core processor with simultaneous multithreading, meaning you actually get eight processing threads to play with. It features a 3.7GHz base clock and 4.2GHz boost clock, and is built using the 12nm process first introduced with AMD's second-generation Ryzen processors.

The main event of the Ryzen 5 3400G is its RX Vega 11 graphics. Fit with 11 Vega GPU cores, it's no stallion, but it will get by in many recent games if you're happy dropping your resolution down to 1080p or 720p and lowering the in-game graphics preset.

Also included in the box is a Wraith Spire cooler, meaning not only do you not need to purchase a discrete graphics card with this chip, you're also let off the financial hook when it comes to buying a CPU cooler too.

This chip will also slot into most modern AMD motherboards thanks to AM4 socket compatibility, the same socket used across the AMD Ryzen lineup. Just bear in mind that your motherboard will need a compatible BIOS and a spare video output in order to work with this chip.

What are the alternatives to the Ryzen 5 3400G?

AMD offers some superb modern APUs built using its Renoir architecture. However, these are only available via OEMs or system builders, and not as discrete components for you to build with at home. If you don't mind someone building your rig for you, then you'll want to take a look at the Ryzen 7 4700G, Ryzen 5 4600G, and Ryzen 3 4300G.

Otherwise, you may prefer to look out for a cheap CPU and graphics card deal during Black Friday or Amazon Prime Day. Both the AMD Radeon RX 5500 4GB and Nvidia GeForce GTX 1650 Super are fantastic GPUs that sell for as little as $170 nowadays, and we're expecting further discounts later this month. Paired with a cheap CPU, such as the Ryzen 5 2600, either will make for a great gaming PC.

Of course, we're still talking more money than this single Ryzen 5 3400G chip, and in that regard there's no matching it in terms of value. If you must build your own rig, and you don't want to spend more on a discrete GPU right now (you can always upgrade later down the line) then there's currently no alternative to the Ryzen 5 3400G in its price bracket.

The AMD Ryzen 5 3400G is already a great value chip, it's only $140 right now. It tends to hover around that price, and rarely drops any lower. We've seen it as low as $129, last November in fact, but rarely any less.

It's one year older now, however, so perhaps retailers will be looking to shift stock. Although with no direct replacement that could be why it's held steady in pricing for so long. One thing to look out for around Black Friday is a promotion from AMD directly. Sometimes it will offer these on its products in the run up to the holiday season, which often includes a free game or subscriptions and can help sweeten the deal for prospective buyers.

Be the first to review “Should I buy an AMD Ryzen 5 3400G?” Cancel reply
Category: pcgamer.com